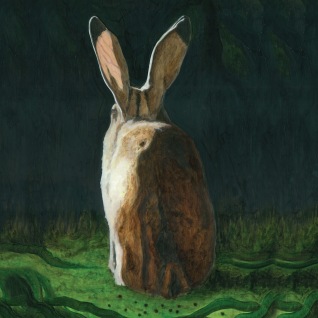 Third Mouth has arrived, and not a moment too soon. When Alexander Tucker released Dorwytch last year, to unanimous approval, there was a sense of excitement that his considerable talents had crystallised into a music that made peculiar sense. Only Tucker could have made Dorwytch, a collision of layered, drone sound and psych-folk that was rich, deep and strange. Third Mouth, then, is the next dispatch from an expedition into unexplored territories. What new lands has Tucker mapped?

I am pleased to report that Third Mouth builds on the kaleidoscopic sounds of Dorwytch, turning on a stream of ideas and invention. Songs that appear slight become captivating. “A Dried Seahorse”, according to Tucker a song about his dad’s shed, carries its fatherhood them and evokes dry, dusty, delicate interiors and forgotten objects: “a dried seahorse inside the shell of your hand / hoping to please.”  Violins dissolve into dissonant vibration as the song ends.

On “Mullioned View” the pounding of muffled drums and swarming violin noise, creates a sensation of watching something through happening far away, struggling to interpret figures glimpsed through smeared glass and occluded consciousness. Everything is hidden and buried, just out of sight: “turning the ground with the palm of your hand / found coins and broken things”. The title brings to mind the first ever photograph: Henry Fox Talbot’s haunted 1835 image of the oriel window at Lacock Abbey, which simultaneously opens up and closes off a new reality. The casement may be closed, but light breaks through. Tucker reaches through to what lies beyond with a tune that is intense, beautiful and seductive. Then the music breaks down into a pounding, threatening rhythm that suggests sacrificial dance.

“Window Sill” is a gentle, creaking coda about the dust and abandonment. It is characteristic of Third Mouth that this track, the most understated on the album, is its still centre. It plays out with a minute of bells and trickling water, deeply, pastoral and evocative.

Tucker says that the title track is about the ordinary and the supernatural existing side-by-side, with a memory of his mother matter-of-factly telling him he could speak in tongues.  The song is densely layered with loops of strings, guitar and voices, showing us a state of consciousness drifting way above ground level.

Sometimes the album shakes hands with the found, radiophonic sounds of Ghost Box artists notably on “Amon Hen”, an instrumental track that places Tolkien in the context of poltergeist interference, haunted music boxes, and David Lynch-style saxophone solo. “Sitting in a Bardo Pond” is a tribute to the Tucker’s friends and occasional collaborators. It’s a song about listening that boasts its own naggingly beautiful melody.

Two seven-minute tracks anchor Third Mouth, and move away from conventional song structures to more experimental forms. “The Glass Axe” is multi-layered, xylophone and drone-driven song based on a magical, folk tale emblem. The track is placed in a between world, which neither “the wasteland” nor “the bright land” but a place where “solid ground is rearranging”. Faint reverberations of “Revolution No.9” echo within deep in the soundscape, while Tucker merges the otherworldy melodies and themes of electric folk with the swirling drones of bands such as Harmonia and Cluster. His take on kosmische is more ethereal though, strings gently swelling rather than driving on in search of the eternal groove.

Finally “Rh” is, rather sweetly, a song about Tucker’s relationship with his girlfriend. However, not many relationships get commemorated in eight miles high vocals and vortices of stomach-lurching organ drone. It’s an affirmation and a delight. Then the final seconds deconstruct the ecstasy in a flurry of clicks, rushes and groans, as the music returns to the very earth itself.

On Third Mouth Tucker brilliantly links musical ideas to create something both new and familiar. Its tracks seem draw out themes across several decades of experimental music. The sap is rising and strange forces are beginning to stir: Third Mouth is here, and Spring has arrived.