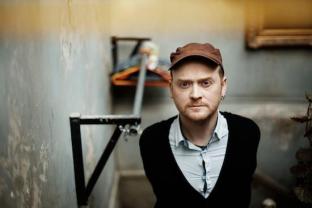 To coincide with the release of James Yorkston’s new album, I Was a Cat From a Book, on 13 August Tom Bolton picks his five favourite Yorkston tracks.

‘Tender to the Blues’ from Moving Up Country, 2002

Choosing just one song from James Yorkston’s first album is a tough ask, but ‘Tender to the Blues’ is probably my favourite of all his tracks. It is a simple song, carrying no excess weight either lyrically or musically, and seriously affecting.  The lyrics are about a break-up, combining resignation, sadness, love, loneliness and acceptance. They pull no punches, neither in giving nor taking:  “And you’re not the girl I thought, I suppose / You leave me tender to the blues.”  The shifting guitar pattern picks out a tune that takes up residence in your head, just like the memories James can’t leave behind.  The title carries an implicit link to Jackson C. Frank’s ‘Blues Run the Game’, placing this song in worthy company.

‘Shipwreckers’ from Just Beyond the River, 2004

James’ backing band, the sardonically named Athletes, come into their own on ‘Shipwreckers’, which was recorded holed up Wales listening to Faust and Annie Briggs. The combination of those two influences precisely locates James Yorkston’s music, rooted in folk traditions but fired by a love of freak out and the power of live performance. Accordion, double-bass, drums – the classic Athletes combination – build a gentle but powerful sound, while a banjo line adds country shading. The song could well be set in a Welsh cottage, lovers enjoying the wild weather and shelter from the storm. The storm is a shipwreckers’ storm, a link to the folk tradition, but the emotions are utterly current:  “Your head against my arm, wet hair against my face / And you’re the girl I want, and this is the place.”

This song, probably James’ most widely known, is quite a departure from his previous work, yet he pulls it off so confidently that its easy to take for granted. But a spoken word recitation of a prose poem over an ambient soundtrack?  James, are you sure about this?  In fact, it is an unforgettably direct interior monologue, exposing his inferiority complex in a manner both charming, and entirely lacking in self-pity. The sound reflects a new confidence that became apparent on Year of the Leopard, which was produced by Paul Webb of Talk Talk. It is located, brilliantly and precisely, in the hazy space that opens up deep in the heat of a summer afternoon.

‘Midnight Feast’ from When the Haar Rolls In, 2008

Having steered clear of traditional folk labels, the folk world instead came to James culminating in this incendiary cover of Lal Waterson’s ‘Midnight Feast’. The recording features several members of the extended Waterson family – Norma Waterson, Mike Waterson, Marry Gilhooly and Oliver Knight – and brims over with excitement. The song is carnal, salacious and wild. It is a celebratory track, entirely unashamed and full of delight. The ensemble sound as though they’re having a fabulous time, and the sound is full and sweet with a rolling drone in the background. The clarion call is irresistible “Aren’t you just ravenous for a midnight feast?”  It’s also a call to arms, to the sound of a ridiculously talented bunch of musicians enjoying every moment. Picking one track from When the Haar Rolls In is no easy task either: most tracks on the album deserve a place, but this has a special energy.

‘I Went to Visit the Roses’ from Folk Songs with the Big Eyes Players, 2009

James’ only covers album came late, but here he finally throws himself wholeheartedly into the traditional folk repertoire. He makes the old songs sound as though he wrote them, no more so than on this mysterious, dream-like account of a man on a quest for a beautiful girl, chased by nameless pursuers:  “I went to visit the roses / the sky was all I could find / Chased was I round the island / like a doe with a hound behind.”  With nothing making complete sense and explanations just out of reach, the love story can’t surely be as simple as it seems. James’ voice is strong and compelling, and the instrumentation stripped back to shuffling percussion and acoustic guitar. It shows just how good he is at telling a story, especially a creepy one.