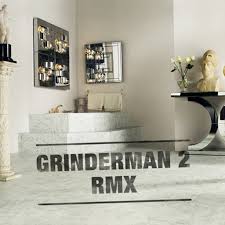 It is entirely appropriate that the last recording from Nick Cave and Bad Seed colleagues in their Grinderman alter egos should be a remix album, usually the final refuge of the artistically bankrupt.

With typical ingenuity, Cave created Grinderman as a parody band that still manage to work in ways it has absolutely no right to. Not since Spinal Tap has rock been so deftly mocked. Cave, with in close cahoots with Martyn Casey, Jim Sclavunos and Warren Ellis, used Grinderman to indulge deep seated desires to grow ludicrous facial hair and make dubious rawwk. They aped the Stones, but Cave has more self awareness in his handlebar moustache than Keith Richards has gathered through an entire lifetime of living down to expectations. Grinderman were equal parts hardcore idiocy, unleashed pent up energy, and song-writing genius.  And who except a hardcore idiot releases a remix of their album?  Such a desperate way to buy credibility!  Such a fad, so past its sell-by date!  What was that, Thom Yorke?

Nick Cave has declared cheerfully and perceptively that at least one track on RMX “shits all over the previous version”. This rather implies that the rest don’t, which would be unfair. The original Grinderman 2 brims with energy and features musicians throwing everything they’ve got at everything in sight. How to improve on four hairy rock geezers having so much fun?

As Cave points out, Nick Zinner gets it spot on for ‘Bellringer Blues’. He does away with the original, backwards guitar effects that introduce the original, cutting straight to the buzzing, shimmering right-way-around guitar sound adding, literally, a layer of bells and whistles. It sounds extra mystic, giving Cave’s voice space to breathe as though he is singing from a mountaintop in the Judean desert.  This is entirely appropriate for a song about a meeting with the angel Gabriel. It also helps to show just how good a song this is, up with Cave’s best work which is saying a great deal.

The album is mostly occupied by competing version of the same song, which shows off some very different approaches. ‘Worm Tamer’ become incendiary in the version by A Place to Bury Strangers, with manic beats and guitar building to the song’s very silly climax (perhaps an unfortunate choice of phrase) with Cave claiming “Well my baby calls me the Loch Ness Monster / Two great big humps and then I’m gone / But actually I am the Abominable Snowman.” By contrast, ‘Hyper Worm Tamer’ credited to Grinderman/Unkle is softer but seedier, and features a new, extra-lascivious Cave vocal. Cat’s Eyes reclaim ‘When My Baby Comes’ via a layer of waspish interference, a shock female vocal and more singing from Luke Tristram, who gets away with it by not trying to be Nick Cave. Sixtoes’ version goes strips out everything except Cave, and adds in some David Lynch instrumentation which suits it perfectly.

‘Super Heathen Child’ is less of a remix and more a version with Grinderman plus a squealing Robert Fripp guitar solo, which delivers extra rock returns from the already super-committed ‘Heathen Child’. Andrew Weatherall’s version sounds more like a remix by someone who does this for a day job than most of the other tracks. It departs hugely from the original, turning it into an epic, interplanetary journey of the type that echoed across Castlemorton Common towards the end of the last century. This is no bad thing.

‘Palaces of Montezuma’ is also pretty much an inside job, remixed by ex-Bad Seed Barry Adamson. He adds extra slinky beats, which add sheen to an inspired love song, that alternates between the hilarious (“I give to you / A custard-coloured super-dream / Of Ali McGraw and Steve McQueen”) and the inventively sinister (“I give to you / The spinal cord of JFK / Wrapped in Marilyn Monroe’s negligee”).

The only real dud here is Josh Homme’s dismantling of ‘Mickey Mouse and the Goodbye Man’, called ‘Mickey Bloody Mouse’. He sucks all the energy from the perfectly poised, menacing original and leaves it beached and dried out. Perhaps he lacks the self-perspective required for the job.

There are three separate versions of ‘Evil’, not all of which work. ‘The Michael Cliffe House” remix is creepy but rather too meandering. Silver Alert’s version ill-advisedly introduces Matt Berninger, lead singer with The National who has a fine voice but ain’t Nick Cave.  Finally, ‘First Evil’ is remixed by Grinderman themselves whose idea of remixing seems to be playing all their instruments at once, with as much distortion as they can muster. As you might imagine, this is a lot of distortion.

What finer and more apt way to sign off from Grinderman, with a blast of noise Nigel Tufnel would be proud of. It’s a shame to see them go, but it’s a fair bet Nick Cave has something equally unexpected and awesome up his sleeve. In the meantime, give into to the power of the RMX.