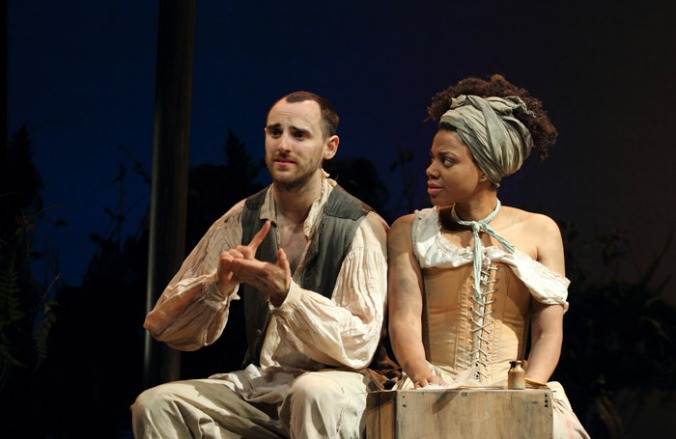 Timberlake Wertenbaker’s breakthrough play is thirty years old, but its popularity remains high. The 1980s characteristics which give it away as a play from a different era are ones that current writers would do well to rediscover. The story of the first play – from a western point of view, of course – performed in Australia, in 1789 by convicts of the first transport ship, is politically courageous and clear-headed in a way that often evades playwrights in a more confused era. It is concise and incisive, complex but direct, and full of wider meaning which Wertenbaker has the good sense to avoid hammering home. Her writing is also wonderfully poetic but functional. She is a playwright who avoids indulgence, her drama apparently driven by a force of its own.

Fiona Buffini’s revival for Ramps on the Moon is an admirably managed and staged production, perfectly suited to the democratic New Wolsey Theatre space (one of six co-producing theatres). Boards cover the sands of Botany Bay, creating a stage for the newly arrived British officers and their cargo of prisoners. Power struggles play out over the identity of the new colony – a punishment camp or a new society – with brutal Major Ross (Colin Connor) contemptuous of naive Second Lieutenant Ralph Clark (Tim Pritchett)’s plan to stage Farquhar’s ‘The Recruiting Officer’, an argument refereed by the Governor-in-Chief (Kieron Jecchinis). The rehearsing convicts, including leading lady Mary Brenham (Sapphire Joy), threatening Liz Morden (Gbemisola Ikulemo) and pickpocket and Garrick-lover Robert Sideway (Alex Nowak) eventually find escape in playing roles that remove them temporarily from the prospect of flogging or the noose.

Ramps on the Moon stage work with casts who are 50% either deaf or disabled. Their determination to provide opportunities for actors who may otherwise struggle is impressive, but importantly the staging adds fascinating levels of meaning. The convicts are all deaf and/or disabled, while the officers, for the most part are not. This establishes a separation, reinforced by the use of British Sign Language throughout. Sometimes, cast members are on stage signing the action to one another and the audience, interpreting the officers’ actions amongst themselves. At other times, they are signing their own lines to one another or, in the case of two actors – Fifi Garfield as future-seeing Dabby Bryant and Emily Rose Salter as Duckling Smith, mistress to an officer – signing all the lines for actors who do not speak at all. This approach lends voices to those who would not have the in a conventional production while communicating the play to a wider range of audience members. It also introduces multiple layers of expression to the play, with physicality becoming as much part of the production as language.

As a result, the themes of imprisonment in ‘Our Country’s Good’ – by poverty, circumstance, class, culture and religion – are played by actors breaking through their own barriers to speak to the audience. As a progressive company, Ramps on the Moon are leading the way by showing what inclusive theatre looks like. It is encouraging that this fundamental innovation is coming from regional UK theatres: London has a lot to learn from them.