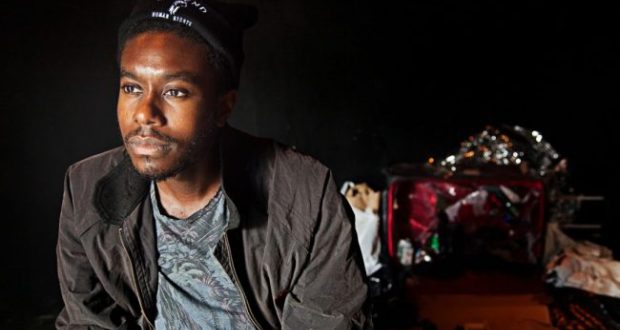 Daniel Keene’s new monologue, performed by Reice Weathers, belongs to a man who would be living in box, if it was big enough. Ringo, who is homeless and living on a pavement, is from an unnamed West African country that sounds very like Sierra Leone. He has a real name, but no-one in his adopted city can pronounce it. He has built a life which is driven by optimism, but stalked by his traumatic past as a child soldier and confined by his destitute circumstances. His world is a construction made of small cardboards which symbolises a space that is his own.

Both Keene’s writing and Weathers’ performance are excellent. As Ringo describes his life, details emerge of what has happened to him and how he came to be in London. The script alters to reflect details of the time (a re-enactment of England’s penalty shoot-out against Colombia) and place (he is living outside Oval tube) where it is performed. He describes his past as another time, and repeatedly talks about the many lives he has led. His descriptions of what happened to him are beautifully, sparsely written and difficult to forget, for example the image of his father being torn from his arms by soldiers rather than, as he observes is more usual, the other way around.

The dark story is lightly but searingly told, and provides deep insight into the complex experiences that lead to refugees living, stranded and homeless, in Britain. Boxman also owes its impact to Reice Weathers’ charismatic, physical performance. In a bewitching, note perfect West African accent, Weathers befriends and cajoles the audience, occupying the physical space that defines his boundaries with distinctive, inventive movement. Guided by Edwina Strobl’s focused direction, Weathers uses his body to express himself, including some expertly delivered Thriller dance moves.

Boxman is compelling, urgent and humane theatre about the trauma and terror hidden in plain sight on our streets. It is also an exceptionally high quality piece, from a confident creative team with the skills to produce work with real impact.