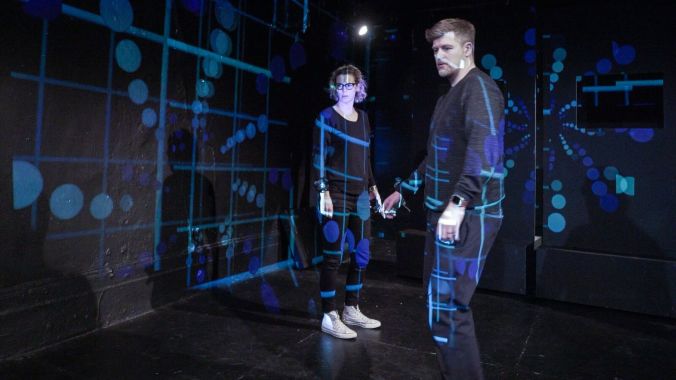 Project 2 – Katy Schutte and Chris Mead – are improvising thirteen shows, a different one for every night of their run at the Rosemary Branch Theatre. Their theme is sci-fi and, triggered by a spacey location chosen from a list shouted by the audience, they are off with the assistance of Star Trek-esque space uniforms and a small selection of set-building blocks. On the night in question, the story took shape in “a garage where spaceships and things are mended”. Schutte and Mead rapidly spin out a generation-spanning futuristic sitcom scene set in a garage from nothing, with a grandfather and grandson, hidden family tension, thwarted dreams and a spacecraft called an Omni Machine (Model 400) which is having problems with its “elevation”.

The idea of using sci-fi as a context for improvisation is clever, because it allows scope for futuristic deus ex machina solutions whenever the performers are in fix. A “robot heavy lifting machine” (Mead, providing his own sound effects) supplies both light relief and plot lubrication. Sci-fi is also a nebulous concept, and its defining characteristic is usually that it analyses the time in which it’s written, while pretending not to. This provides scope to reflect on the here and now, but the focus of ‘Thirteen Cycles’ seems too unclear to make effective use of this freedom. Lacking a social context, the darker aspects of the show (violent rebellion, laser execution, assassinations, inequality, injustice), which were fully explored by the performers, carry very little weight or wider meaning.

The boundary between improvisation and pre-planned structure is also unclear. While the first scene is entirely off the cuff, seemingly pre-planned break points and storylines became apparent and the evening settles into a series of surprisingly conventional dramatic scenes. When the performers were clearly making the entire show up on the spot, the audience was engaged and willing to forgive them anything. As soon as that feeling of danger dissipated, the limits to the quality of the drama began to dominate.

Thirteen Cycles benefits greatly from its soundtrack and lighting design. The former is a low-key, expertly concocted brew of electronics, performed lived by musician Fred Deakin (of Lemon Jelly fame). The retro-futuristic laser-style projections by Guillaume Querard were clever and effective, adding serious atmosphere. The show is certainly enjoyable, Schutte and Mead are engaging and no-one will feel short-changed. However, it lacks the conceptual clarity needed to make it something more than a fun night out.

This show was seen with a free ticket.