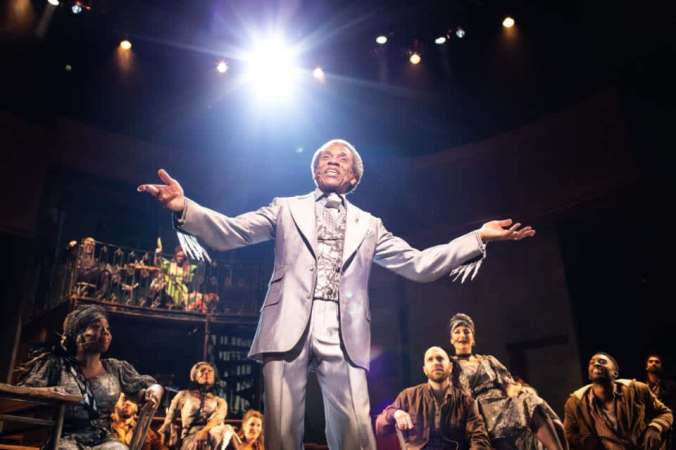 Singer-songwriter Anaïs Mitchell‘s ‘folk opera’, Hadestown, is based on the Orpheus and Eurydice myth, the ultimate ancient story about music. It has evolved from a song cycle for just Mitchell and her guitar to become a theatrical production, first touring regional US venues, then Off-Broadway and now in the wide, open spaces of the Olivier Theatre. ‘Folk’ was always a misleading description for music that it is as much influence by New Orleans jazz and blues. However, in the ten years it has taken to reach London, Hadestown has become a surprisingly conventional musical. It does not provide enough of the unexpected, and somewhere along the line has mislaid its edge. The end result is a rather middling entertainment with high points and low points, but ultimately a lack of coherence.

The show, directed by Rachel Chavkin and designed by Rachel Hauck, is set in an underground night spot that surrounds the Olivier with tiers, tables and chairs for the onstage band. The drummer plays behind the bar in a perspex chamber. Apart from general atmosphere, the setting contributes nothing more to the evening than filling the space, which is a disappointment. The idea of a nightclub as portal to the underworld is mostly represented by silver-suited André De Shields, as the messenger god Hermes. His glorious voice makes all his numbers a delight. He is one of the show’s highlights, another being Eve Noblezada as a backpacking Eurydice, with a singing voice that commands the material. Meanwhile Persephone, Queen of the Underworld is a raucous Amber Gray who likes to party. And Hades himself, Patrick Page, has the world’s deepest voice which astonishes the theatre. In the stand-out number, ‘The Wall’, he asks “Why do we build the wall, my children?” They reply, “We build the wall to keep us free.” Written some time before the advent of Trump Mitchell’s song hits home hard, and Page sings it like Tom Waits.

However, while these are highlights the show is uneven. It is undermined by the portrayal of Orpheus (Reeve Carney) who is written and played as a sort of Justin Bieber character in a denim jacket, who carries a guitar everywhere and singing annoying, lightweight ballads at the drop of a hat. It is a tough task to write songs for a legendary musician who can charm the very stones, but the entire approach seems misconceived. With the rest of the show seeking an after hours atmosphere, he does not belong at all.The wider setting is also incoherent. Hades and Persephone, perched on a balcony above the bar, seem ready to go in ‘Cat on a Hot Tin Roof’. Hell is revealed as a 1930s ‘Metropolis’ nightmare rather than addressing 21st century concerns, which defuses the political impact. Meanwhile, Eurydice and Orpheus have blown in from the early 2000s, Hermes is an all-purpose MC for hire. The show is also obsessed with the Olivier’s revolve, which spins and counterspins at the slightest excuse, concentrating all the action into a small circle in the middle of the stage. While Mitchell has written some barnstorming numbers, they do not come together to form a show with the same consistency or impact as her music at its best.