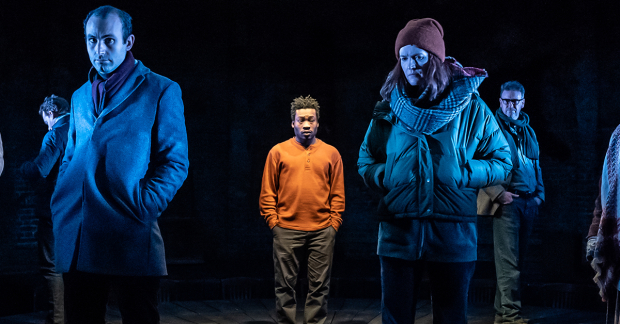 The cast of Shipwreck © Marc Brenner

Annie Washburn’s new play is intended as a reckoning with Trump. The show pitches itself as a invitation to dinner with the 45th President, but unfortunately would be better described as an evening of meandering chat with a cast of confused New York liberals. The set-up is a snowed upstate weekend attended by three couples: two ultra-wealthy lawyers, two aging hippies and a pair who have just bought a farmhouse, and have only leftover hot dogs  in the freezer. The talk turns immediately to Trump, Jim and Teresa having arrived from helping their daughter give birth, for which she requested a “Trump-free 24 hours|. The setting is 2017, during the revelations that followed Trump’s dismissal of FBI Director James Comey. Stranded around a fire, the couples run through their disbelief, frustration and rage at the state of the country, and secrets begin to emerge. As a parallel plot strand, Mark discusses his adoption as a Kenyan baby by a white NY family, including scenes with his parents, and describes the process of understanding what slavery meant to black people in the US, and what it means to him. Finally, we get dinner with the President, as the talk is interspersed with grand guignol scenes presided over by a demonic, semi-clad Trump.

On the surface, this sounds like a compelling set of ideas, and the basis for an engaging drama, but it does not work out this way. The play is long – 3 hours – which is fine as long as the time taken seems necessary and inherent to the drama. Here it seems indulgent and, while there is plenty of sharp dialogue scattered throughout the evening, it could easily have been half the length without losing anything important. The tension simmers, very gently, below the surface of the campfire conversations, and some scenes are simply boring, especially a dialogue in which Mark reflects on a conversation with his parents about whether he is allowed MTV. It is an earnest attempt to explain the origins of the Trump mindset, but it is not clear why a stage is the place for it. The Almeida’s new, temporary revolve spins the play round on the spot, never reaching a destination.

The second half of the play breaks down into a series of monologues. Marks’s role is almost entirely speeches to the audience and, although well-written and pack an emotional punch, they seem disengaged from the rest of the play. This is not helped by an explanatory, rug-pulling twist which comes in the penultimate line of the evening, which far too late to be reorientating the audience’s perceptions of everything they have heard. The Trump scenes are also dull, which is unforgivable for carnivalesque satire. Shipwreck has a half-American, half-British cast who are uniformly excellent, including Raquel Cassidy as Jools, whose mildness finally lurches into fury, Khalid Abdalla as Yusuf, the lawyer who plays with the dark side, Justine Mitchell as Allie, whose activism is all talk, and Fisayo Akinade as Mark. However, the play is need of a serious edit, and it is frustrating that a well-intentioned attempt to skewer both the politics of populism, and the comfortable liberal assumptions that enabled it, cannot find the focus it needs.