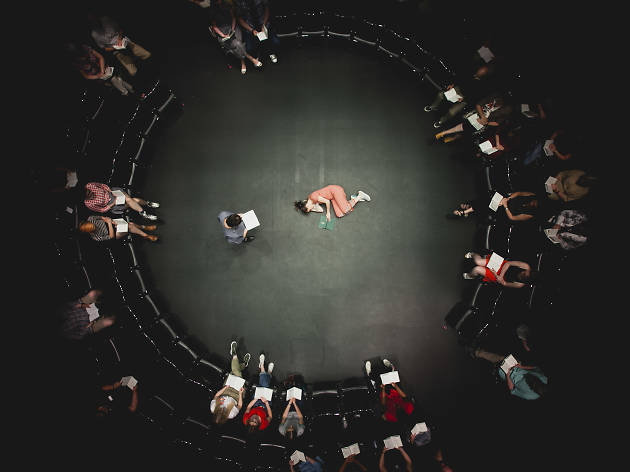 Wherever Tim Crouch is involved, unpredictability is guaranteed. Audience expectations will be tested and the components of theatre dismantled. An apparently gentle experience will, in all likelihood, become steadily more unnerving. Total Immediate Collective Imminent Terrestrial Salvation fits the template. Seated in a circle, the audience are participants from the start, equipped with a book each and beset with enquiries about reading glasses. The themes of trusting a writer, following a text and seeing clearly, or not, are upfront. What follows is technically ingenious and innovative, as the audience turns through the story page by page, some of it shown in drawing form, some as text spoken by the actors and, sometimes, read by the audience. However, the form seems to dominate the central drama which seems constrained, not released, by these filters.

The group experience of reading what is, effectively, a graphic novel, is strangely compelling. As a family tragedy, subsequent separation and its alarming context is played out by the cast of three (Shyvonne Ahmmad, Susan Vidler and, eventually, Crouch himself) the truth of what is written down in front of us is brought into question. However, the gaps between story and reality come as no surprise, and the drama underwhelms. Ultimately a play about both grief and doomsday cults, the story is hard to credit from a naturalistic point of view. Because it is played dead straight, the story’s metaphysical edge is dulled and the events of the play seem more device than drama. The experience of being experimented with as an audience, however, is oddly exciting even if the experiment does not add up to much more than the sum of its parts.