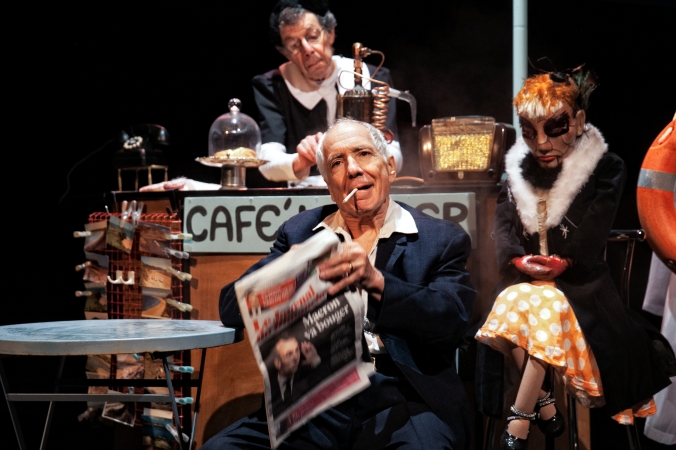 Longevity is the key to People Show. The numbering system tracking their performance history back to People Show 1 (1966) makes it the headline. The experimental theatre tradition that feeds their creativity involves physicality music and inventive stagings scraped together from very little. Their survival is, in itself, remarkable but the rationale for this most veteran of companies is live performance. The old shows are not forgotten, but they are gone, and the only thing that matters has to be what you are watching right now. It’s a curious tension and, despite their attempts to embrace age and change, God Knows How Many has the feeling of a show from a different time.

The two main performers are Mark Long, who has been involved with People Show from the very beginning, and two very long-term collaborators in Emil Wolk and George Khan. The show is delivered in sketch-like conversations and scenes with a pleasantly off-kilter atmosphere. An impressive animatronic doll opens with a chanson, Wolk as a customer in a French cafe has a prickly conversation with its proprietor (Long in a waitress costume), George Khan plays saxophone at a cabaret with the others on brass. And it is in French, or at least Franglais. People Show, it becomes clear, are performing at the behest of their big tobacco sponsors who make irrational demands and fine them for transgressions. Meanwhile, they are wrestling with the depredations of age, and can no longer perform their definitive gymnastic set-piece, the ‘Umsty Bumsty’, while a sinister tennis ball keeps dropping above bringing forebodings of death.

There is no lack of inventiveness in the evening, and the company have an admirable ability to conjure moments that capture the audience’s attention, and to deliver about turns that keep the audience intrigued. However, there is little sense that this show is urgent or current. It is a very male-dominated enterprise with the exception of the animatronic chanteuse, complete with with jokes about sexy ladies and sex crimes, and a strange digression on Whitney Houston based around mispronouncing her name as ‘Wendy’. These skits feel tired, and the jazzy musical interlude has surely not been seen on a fringe stage for many a decade. While People Show 137 has dark 21st century corporate influence in its sights, it feels too unfocused and too caught up with in-jokes to hit its targets.