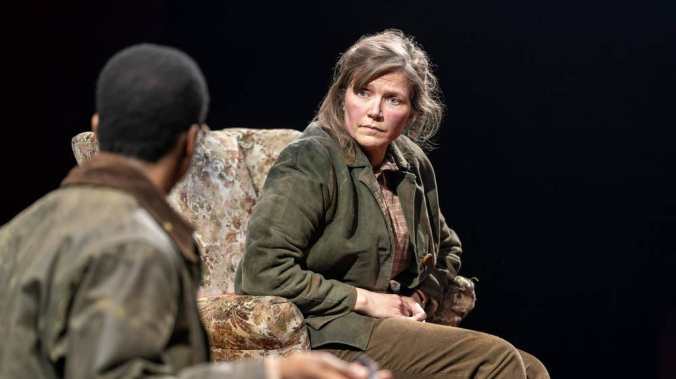 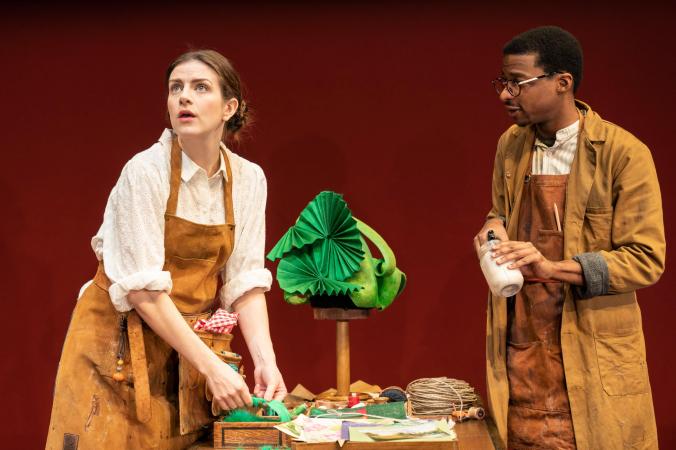 Caryl Churchill wrote Far Away in 2000 and, 20 years on, it feels more current by the moment. This is truth both of its setting – an unnamed dystopian location outside an identifiable time – and to its themes of oppressive, authoritarian governments who place people in opposition to one another, and to the natural world. At only 45 minutes and six scenes, Churchill does not waste a moment, making every word tell.  The precision of her writing burns each scene into the mind and, by saying only what is necessary, she leaves wide open spaces beyond the stage to be filled by the imagination.

Lyndsey Turner’s direction and Lizzie Clachan’s design deliver moments of low key but devastating emotional impact. The entire play emerges from under a menacing steel box which lifts, lowers and lifts again to reveal new sets beneath. Apart from being technically very impressive, this containment reflects what seems to be going on beyond what we can see on stage. The play covers three time periods. A woman called Harper (Jessie Hynes) tries to shield her young niece Joan who has questions about the terrible things she has seen her uncle doing, involving children, cages and blood. Two milliners – Todd (Simon Manyonda) and the now grown-up Joan – are new colleagues. There is sexual tension and discussion of working condition before we see, in a devastating reveal, the context for their work. And finally, Harper, Todd and Joan are together and Joan is on the run, from a baffling realignment of nature in which nature has turned on people and formed alliances. Rivers may not or may not be on ‘our’ side, crocodiles are in alliance with the Latvians and dentists cannot be trusted. It is, in equal measure, funny and horrible.

The Donmar’s production is pitch perfect, with an intensity of focus that spotlights the universal elements in this dark story. While the scenarios play out ‘far away’, it is terrifyingly clear how this could be a portrait of our own future. The issues of our time, from the imprisonment of children to the collapse of our relationship with the natural world, are all in this darkly prescient work. Churchill writes her characters with a complete naturalism, enhanced by the performances which are uniformly excellent. This makes the strange context in which they find themselves all the more believable. Churchill’s writing is only now coming into its own as new creatives discover what she has left for them to find. This production is a mesmerising account of a play with a disturbing amount to tell us.